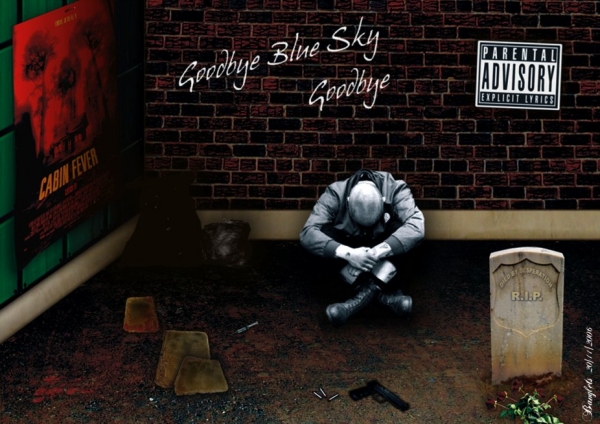 Photo montage made ​​with Corel Draw the illustration program, that includes more than 10 different images: Cabin Fever poster, trash bags, wall, the tomb that was modified to put "died by desperation", etc.

In this work, the protagonist, along with the main character that appears crouching in middle of the room, is the dirt, achieved through the use of multiple shadows, contributing to the bleak picture appearance. The main protagonist of the image, hovering between life and death, on the left and center, methods of death, on the right, the achieved ending: "died by desperation".

The original title of this photographic montage is "Goodbye Blue Sky", in tribute to the known song of Pink Floyd.

Photomontage "Goodbye Blue Sky", died by desperation, over 10 pictures joined into just one through Corel Draw the illustration program

Web designer and programmer with more than 15 years of experience. Specialized in HTML, CSS, PHP, MySQL and JavaScript. Expert in optimization of websites.

Implicated, perfectionist, with great capacity for adaptation and learning. Lover of the cinema Composer and singer in The Grim Line.